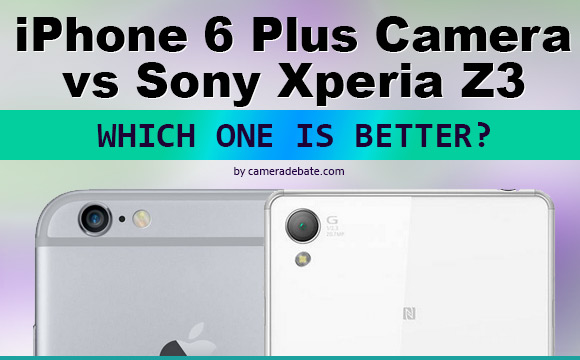 Before we start talking about the differences between the iPhone 6 and Xperia Z3 in-depth, let’s first take a look at the main camera specs for each device.

The above iPhone 6 Plus vs Xperia Z3 specs comparison table clearly highlight the key differences between the two.

The first thing that I personally look at when I compare two cameras one versus the other is how big the sensor is. We can see that the iPhone 6 Plus sensor is smaller than the Sony Xperia Z3. The sensor size itself doesn’t actually tells the whole story. We can see that the Xperia Z3 actually has smaller pixels compared to the iPhone 6 Plus. This due to a much higher sensor resolution. The Xperia Z3 pixel density is higher and to “squeeze” so many pixels on a small sensor requires a reduction in the pixel size.  On advantage if obviously that you get to shoot in much higher resolution, 88.5% higher resolution compared to the iPhone 6 Plus to be exact (iPhone 6:3264 x 2448 ; Xperia Z3: 5248 x 3936 pixels).

The difference in pixel size is quite significant but does it have a negative effect on the image quality. Using gsmarena.com photo comparison tool has shown me that the both phone are very close to be equal in terms of image noise. The Sony Xperia produces sharper image with higher contrast, but I also find the in-camera sharpness by default is higher. The iPhone 6 seems to have a higher dynamic range. The Z3 certainly enjoys a resolution/detail advantage with punchier colors. Both cameras of both phone performed very close overall and we can see that inflicted from the DxOMark test results for both mobile phones. In fact, the Xperia Z3 looked bit cleaner when you look up close at 100% scaled image. You can check you the comparison yourself here. No doubt that the Xperia Z3 Exmor R sensor and image processor combination does wonders for here and the larger sensor of the Z3 certainly halpes maintain very good performance considering its very high resolution. This just makes you wonder what if Sony has decided to use a 8MP resolution?

Another thing that you might have notices is that the Sony Xperia Z3 can shoot at up to ISO 12800 sensitivity. This is the highest ISO speed I acknowledges from any phone on the market. No doubt that this ISO is way of the scale and will produce lots of chrome noise. However, for small scaled images it’s certainly acceptable and can produce acceptable quality images.

The Apple iPhone 6 Plus utilizes a newly designed sensor. The iPhone 6 Plus model also utilizes on-sensor phase-detection pixel to improve subject tracking performance. This is the second smartphone on the market that utilizes this technology – Samsung Galaxy S5 was the first one. This technology will eventually be found in most smartphones in the near future, as it considerably improves the AF performance of the camera compared to contrast-detect AF only based cameras, like the Sony Xperia Z3.

Apple “Focus Pixels” technology is certainly a super important update, and a huge improvement in AF performance in both stills and videos compared to the iPhone 5S. Check out the video below by Blunty and be ready to be amazed. The iPhone 5S utilizes contrast-detect AF, the same as the Xperia Z3.

No gimmick, just pure super-fast AF performance! — you can see that the iPhone 5S “hunts” trying to seek the right focus point by comparing the contrast of several image to find out the right focus area.  So all I could say is WOW!

That’s why I think that future flagship model will include phase-detect AF, because once you see it in practice and use it, you just can’t go back shooting with a mobile phone camera that only uses contrast-detect AF system. Also worth mentioning that the iPhone 5S doesn’t have continuous AF during video, just for stills.

The iPhone 6 Plus features a slightly slower lens. the Xperia Z3 f/2.0 lens allows 1.21 times more light to pass through the lens with 0.275 stops difference between the two. That said, it’s not a big advantage, but of course fast lens is always a better option as it helps to improve the cameras low-light performance.

The Xperia Z3 also features a wider lens. A 25m focal length of the Z3 equals to 48.5° horizontal FOV and 33.4° vertical FOV. A  29mm focal length on the iPhone 6 Plus lens gives you 42.4° horizontal FOV and 29° vertical FOV, so it has narrower field of view compared to the Xperia Z3. This allows photographers to squeeze more of the surroundings into the frame, which is useful for group shots, selfies (if you use the back camera for that), landscapes, interiors, etc. I personally prefer a wide angle lens because it’s more versatile for daily shooting and because we don’t have the option of an optical zoom.

The iPhone 6 Plus lacks 4K UltraHD video recording,  the Sony Xperia Z3 has it. I personally don’t own a 4K display, but I would probably want one in order to be able to watch my precious memory on a 4K when I could afford one. 4K videos have four times the resolution of HD and two times the resolution of Full HD. You’ll be blown away how amazing those 4K video look on a 4K display. We aren’t used seeing so much details, especially for those who are watching videos on a 720p HDTV monitor.

I think that foe the time being, most people will be more than satisfied with 1080p, and let’s not forget that 4K videos take much more storage space.

On of the biggest advantage that I see for video recording is that ability to shoot with the Sony Xperia Z3 underwater (up to 1.5 meters of fresh water for 30 minutes). The iPhone 6 Plus is not waterproof. This of course can also helps protect the phone against accidental water damage.  Both phones will give you very satisfying results, but although the iPhone 6 Plus has the OIS advantage, I found the iPhone 6 Plus to be more for my taste due to it’s optical stabilization and advanced video stabilization (smoother captures) and very fast AF performance.

I think that the iPhone 6 Plus certainly put itself as one of the leaders when it comes to camera performance. The added optical stabilization, super-fast AF performance, 720p240 slow-mo recording and manual controls, all make the iPhone 6 Plus camera one of the most exciting ones this year. The Sony Xperia Z3 although lacks an OIS, does have its own advantages over the iPhone 6 Plus, including higher ISO range, faster lens, larger sensor with higher resolution, waterproof build and superb optical performance.

So both cameras of both phones have their cons and pros. I personally found the iPhone 6 Plus camera to fit better for my shooting style, but I’m sure that there are many people who find the Xperia Z3 to be better for their shooting style. You can’t go wrong choosing either. If the Xperia Z3 had an optical image stabilization and phase-detect AF, I tihnk that I would opt for the Xperia Z3, but these two features are key features for any camera in my opinion. The autofocus speed for stills and videos as well as optical stabilization, those two help promote better looking stills and videos. At the end of the day I want to come home with good quality photos and videos, and I think that the Apple iPhone 6 Plus will help me achieve that a bit better than the Z3.

That’s my opinion, you might have a completely different opinion. I want to hear what your think and whether your prefer the iPhone 6 Plus camera or the Xperia Z3 camera. Please share your thoughts and opinions in the comment section below and thanks for reading.