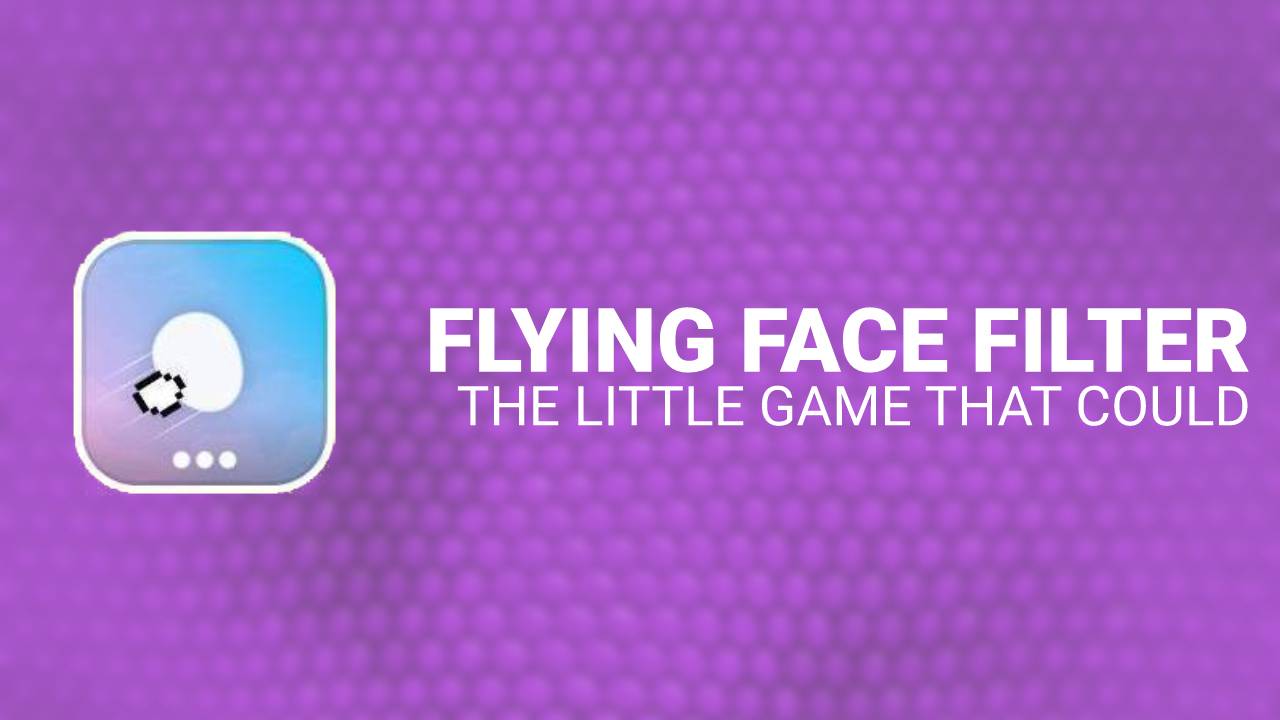 Flying Face filter by Dvoshansky is a little interactive Instagram filter but one that many people enjoy playing. It resembles the original Flappy Bird game but designed using unique blinking game controls that make the gameplay feel different, stand out and entertain in a completely different way. Not just compared to the original Flappy Bird game, which was developed by another developer, but compared to many other games that people are used to playing on mobile.

Flying Face filter game is very simple, everyone can play it (unless you have issues right now to locate the game, as of the time of writing many do). It’s one of those games that are easy to learn by super hard to master. All you have to do in this arcade game is to navigate a bird by controlling its vertical movement and make it pass through gaps, avoid colliding with obstacles and try to survive as long as possible while maximizing your score.

You can a single point for each obstacle you pass through. People who first start the game only able to achieve a very low score and the average gameplay session is about a few seconds long.  After some practice, you get better and better.

The game is controlled using eye blinking. This means that in order to move the bird up, you need to blink with your eye or both eyes, preferably with both eyes for better accuracy. Sometimes when you blink with one eye the game doesn’t detect it.  You have only a single life and you need to make the best of it. One crash either by colliding with the obstacle or dropping down to the bottom of the screen and you lose. The total score is set at the end of the game and this is your final score. You can share your results on social media. Most people share their score as an image or video as stories on Instagram and tag dvoshansky the developer.

Dvosahsnky adds some of those highscore stories in his Flying Face filter story, there you can actually find some of the best scores achieved by Flying Facefilter players from all around the world. I’ve seen some amazing scores from players in Singapore, Malaysia, and Japan, rocking 600, 700 and even more than 1500 points, which is just crazy.

As of the time of writing, some Instagram users have problems playing the game. By that, I mean locating the Flying Face filter icon in their Instagram app. This is an issue that I had as well, and from what I’ve read, Instagram is working on a fix, but it’s not an official word. One of the solutions that were helping me was to uninstall the Instagram app on my Android and reinstall it. Later on this also didn’t help, and what helped was to enroll as a beta tester for Instagram on Google Play on my OnePlus 6 Android phone  and then I saw the filter list button at the bottom right side of the camera app on Insta and I was able to locate Dvoshansky’s filter and able to play this filter game.

Flying Face is a fantastic little arcade game that I think will pave the road for more great IG game to come, selfie games, where the controls are not tapping but facial gesture based. Regarding the issues that people have locating Flying Face filter icon, I hope Instagram will solve this issue fast so we can all have a great time playing Flappy Bird on Instagram and try to break some highscore records.

If you are wondering what is the world record in Flying Face filter? Well, as of the time of writing, and based on what I was able to find, it’s 1550 points achieved by kokoleyy Instagram use (he is also a TikTok creator). Insane, crazy, unbelievable — well, it might look like it, but some players are really doing great in this game, do you think you can beat that score? In time, others will, I have a feeling, maybe it will be the same person or you. You won’t know until you play Flying Face yourself and try it out. Good luck!